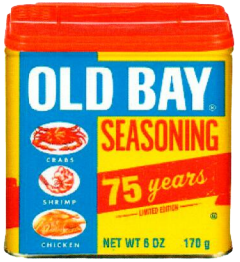 For 75 years, OLD BAY has been “The Can that Connects Us.” The can, which could be found in the kitchen of anyone including a teacher, a dock worker, a high school sports star, a lawyer, a rocker, world’s greatest grandma, a firefighter, and a hairdressers, is meant to show OLD BAY as more than a seasoning. It’s a symbol of good times that unites people. It’s given as gifts, packed in care packages for troops, shipped internationally and even tattooed on bodies. To honor this milestone, OLD BAY is unveiling “The Can that Connects Us” celebration, including a commemorative can, an interactive OLD BAY mosaic, new OLD BAY products and much more!