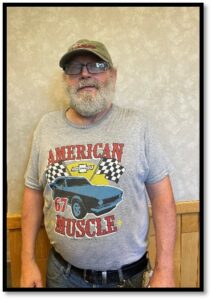 Steve is officially retiring on June 30, 2022, after starting his career at JL Clark on March 22, 1977.  He currently works in the Shear Department as a Trim/Slit Operator, but he’s also worked as a Forklift Operator, Material Handler, Waxer Operator and started his career here in the “labor pool”.  Since Steve has been here so long, he has worked with many, many people over the years which is what he’s going to miss the most.  Steve commented that “working at the same place for 45 years is very unique and people just don’t do that anymore.”

Dan Bechtold, the current Shear Lead had this to say about Steve: “Steve has been at JL Clark since 1977 – that means he’s literally worked there my entire life. He’s helped train every single employee in the sheer department. Not only will we be losing his knowledge and expertise, but we will be losing a great employee and friend.”

Steve’s advice for those who take over his position is to “do what you’re told, because you won’t learn if you don’t.”  He is going to miss the people here the most, but he’s excited to let the “young folks” take over.